Hotel Miory is located in the centre of Miory of Vitebsk region, in 1 km from the bus station. Near the hotel there is a museum of local history. 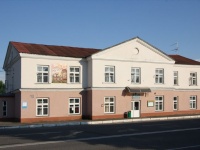 The address, how to get there — hotel Miory

How to get to hotel Miory by public transport:

How to get to hotel Miory by car:

Location on the map — hotel Miory

Church of the Ascension of the Virgin Mary in Miory

The monument to the unborn child